Emigration from Bohemia during the Hussite Movement

The Hussite Movement and its consequences initiated a relatively strong wave of emigration of the Catholic population behind the borders of the land. The emigrants were mostly clerics – priests and monks. They usually headed for places where their orders were active, i.e. a parent, subsidiary or allied convent or to places where the convent owned some property, in particular Moravia, Lusatia, Silesia, the German states or Poland. They took many monastic manuscripts with them, which remained in the foreign monastic libraries. 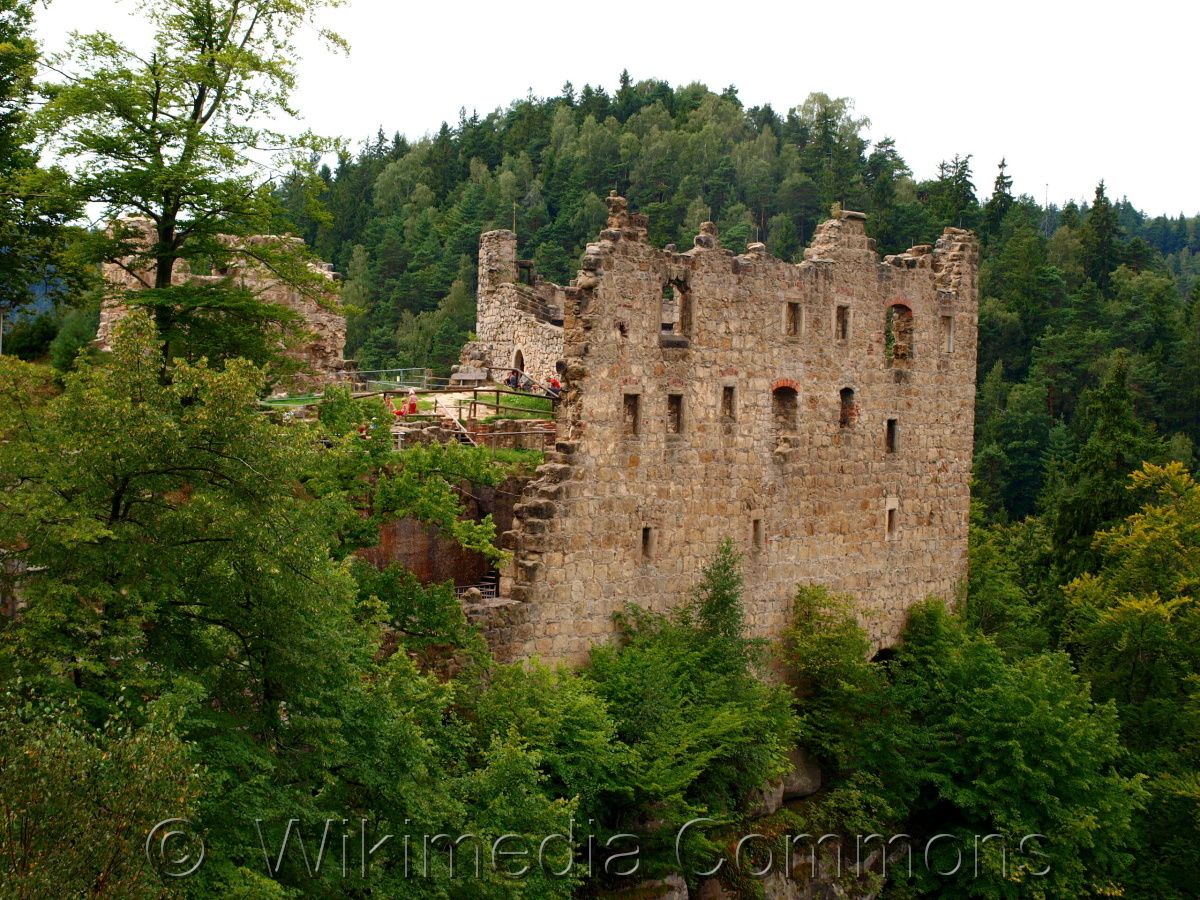 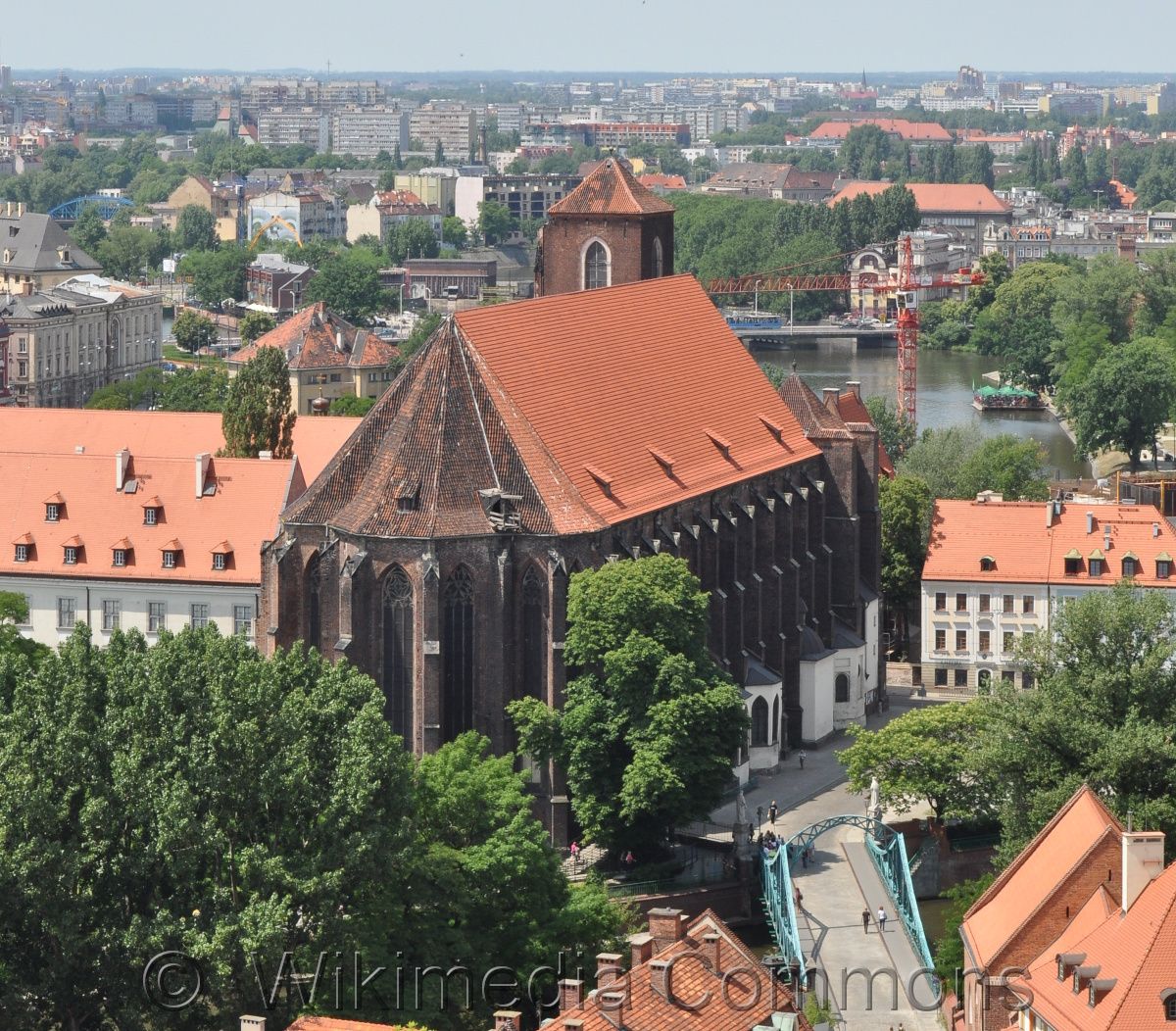 Religious emigration from Bohemia between the 16th to 18th centuries

In the 16th century, the Bohemian Brethren who were banished in 1548 emigrated from Bohemia. They usually went to Greater Poland where they established a Polish branch of the Unity of the Brethren and some of the brethren settled down in Prussia. After the Battle of White Mountain and issuance of the Renewed Land Ordinance (1620, 1627), the non-Catholics, i.e. Bohemian Brethren and the Neo- and Old-Utraquists left for Silesia where they established Czech-language Lutheran congregations and the German-speaking exiles established new settlements in the Ore Mountains. Saxony became a destination of new waves of immigrants in the 1670s and 1720s. A renewed Unity of the Brethren was established in Herrnhut (Ochranov). The migration balance (i.e. difference between the incoming and outgoing populations) clearly illustrates migration processes on the territory. In the years 1921-1930, they were related to concentration processes connected with the growth of larger towns in the industrially developed northern half of the territory, but also in Hradec Králové and Zlín and larger agglomerations of Prague, Brno and Pilsen. The rural districts depopulated, in particular in south-west Bohemia, the Bohemian-Moravian Highlands, south and east Moravia and the peripheral areas populated by the German ethnic minority (in particular the Broumov Spur, Jeseník Spur and Frýdlant Spur).

Migration of the population to Prague as of 1921, in: Atlas Republiky československé (1935). Map Collection of the Institute of History, CAS. Display map

Migration of the population to Bratislava and Liberec as of 1921, in: Atlas Republiky československé (1935). Map Collection of the Institute of History, CAS. Display map

The violent relocations of the populations in Europe intensified after the outbreak of the Second World War. Within the 'Heim ins Reich' policy between 1939 and 1942, about 800,000 ethnic Germans moved from South Tyrol, the Baltic region, Eastern Europe and the Balkans to the German Reich. In the years 1939–1941, over a million Polish citizens were driven from the occupied western part of Poland and the same policy was used by Stalin in the eastern Polish territories. In 1940–1941, the populations were also relocated between Hungary, Yugoslavia and Romania, between Romania and Bulgaria and between France and Germany. The German resettlement policy caused further subsequent war and post-war mass relocations, which also served as a means to deal with issues of ethnic composition in the central and south-east European states. 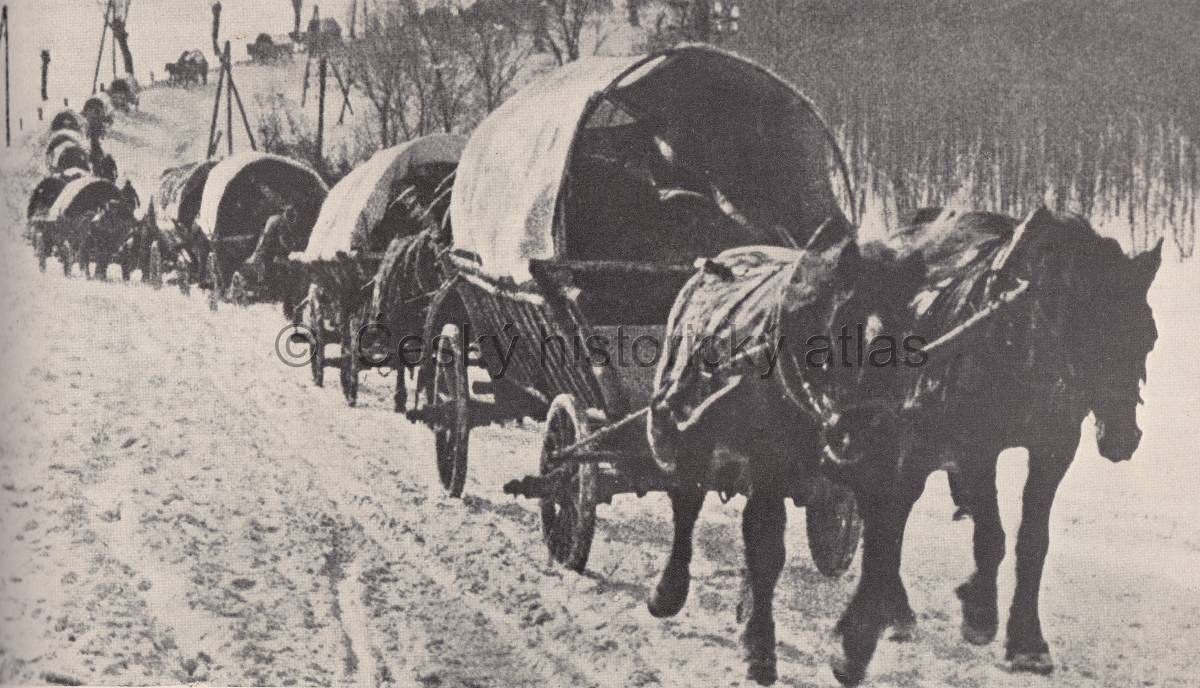 The fate of the Jews – citizens or temporary refugees from the German Reich – was sealed by the dictate of the four powers regarding Czechoslovakia on 29 September 1938. As the map shows, there is no doubt that the Jews hastily left the ceded territories for the interior, but in the spring of 1939, they tried to leave Czecho-Slovakia permanently. Their decisions were fuelled by political changes under the Second Republic and manifestations of anti-Semitism. From 1 October 1938 to 15 March 1939, the number of Jews, the Czechoslovak citizens, dropped by 14,000 people. 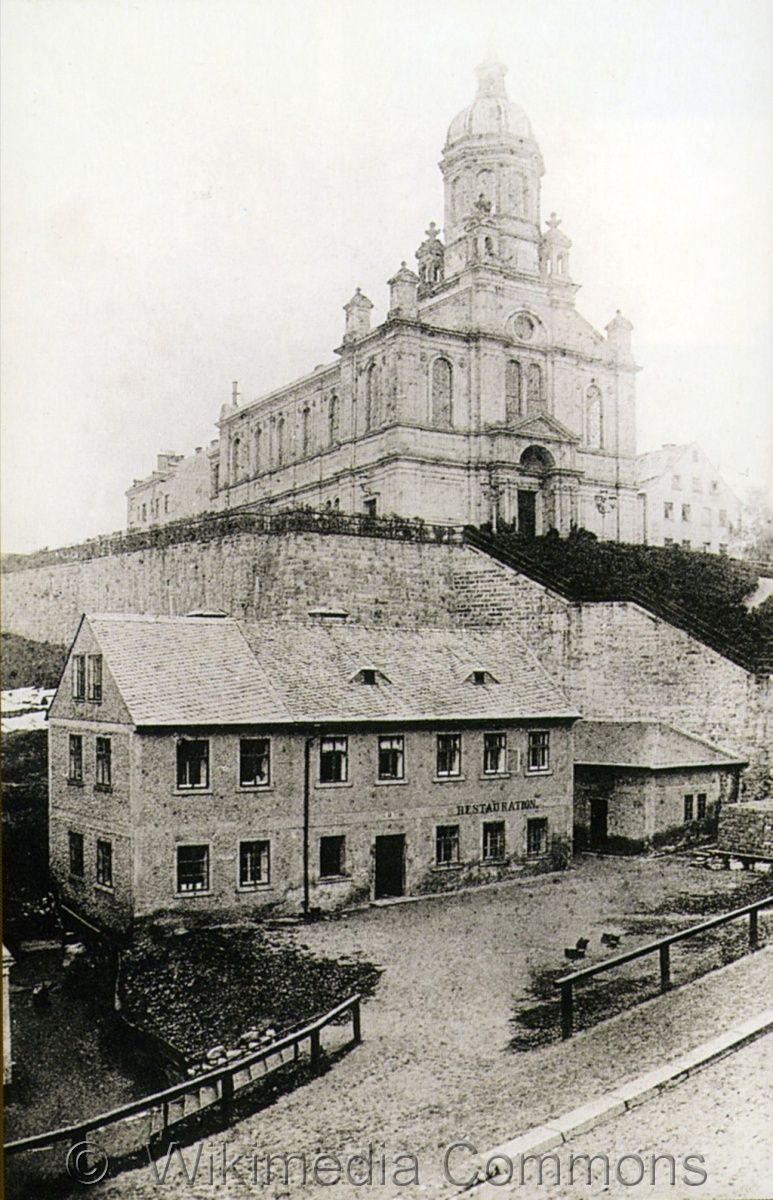 The anti-Jewish pogrom from the 9th to 10th November 1938 also affected Czechoslovak Jews in the Sudetenland. The synagogues and prayer rooms did not escape the Nazi frenzy either. They were all architectural gems, which also applied to the Liberec synagogue. Photo R. Karpaš, J. Mohr, P. Vursta, Kouzlo starých pohlednic Liberecka, Liberec 1997. Wikimedia Commons. Accessible here [verified 05/04/2020] 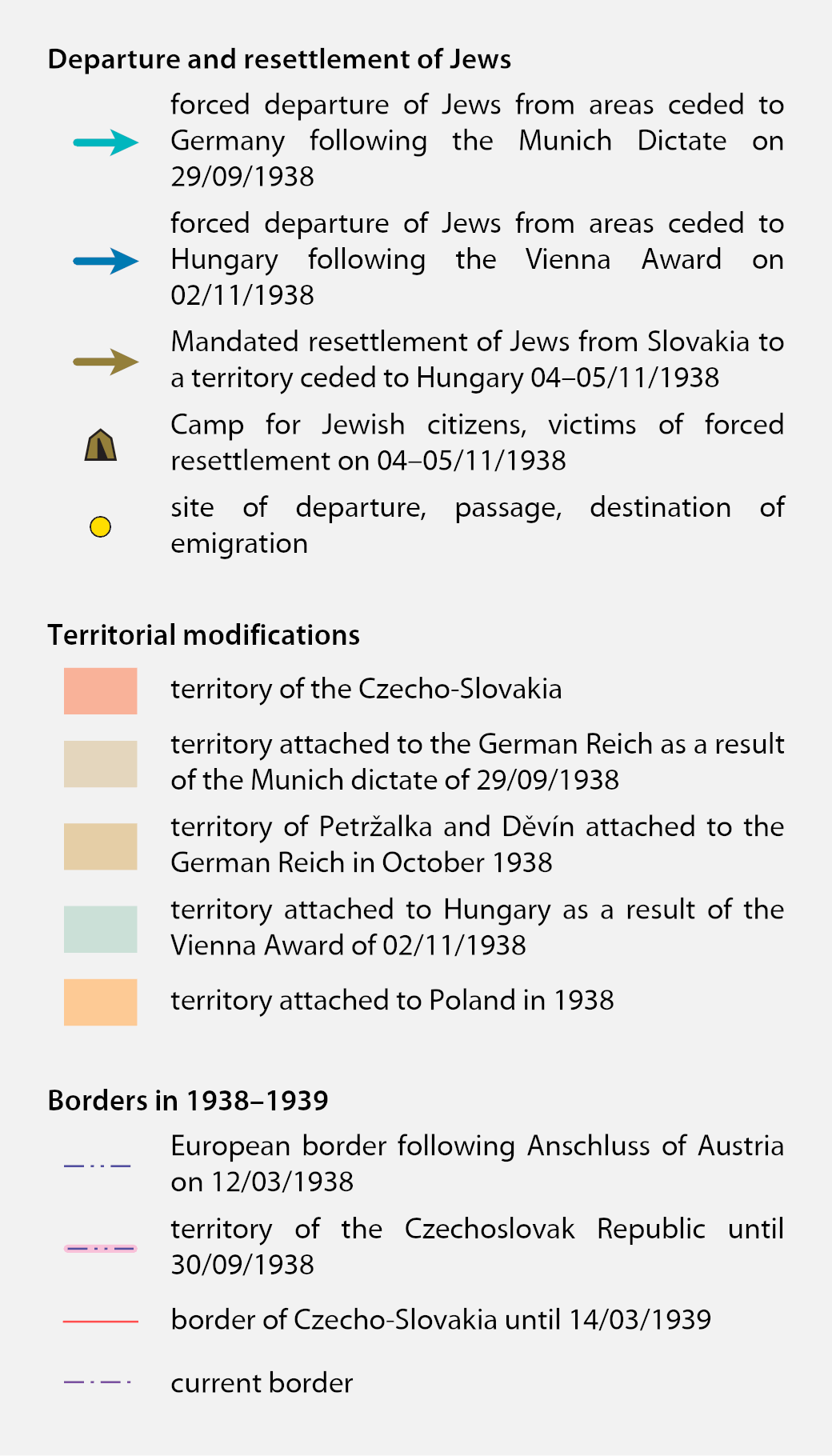 The historical development of the Czech Lands has experienced several important migration waves when some of the citizens voluntarily or forcefully left the country for political, religious, social, or economic reasons.
In the older period, emigration was mostly motivated by religion. During the Hussite Era, the Catholics, particularly the clergy, left the Czech Lands while the period from the 16th to the 18th century was characterized by heavy non-Catholic emigration after the defeat of the Bohemian Revolt at Bílá Hora (1620) and the issuance of the Renewed Land Ordinance (1627), which permitted only the Catholic religion in the land. From about the mid-19th century, socio-economic motivation started to prevail – the Czechs emigrated overseas, mainly to the United States of America on a mass scale.
The rise of Nazism and the beginning of the Second World War resulted in large movements of the populations especially in Central and Eastern Europe, which also affected the Czech Lands. The secession of the Sudetenland commanded by the Munich Agreement in September 1938 resulted in a wave of movements of the ethnically Czech population into the interior. The political changes and intensifying anti-Semitism under the Second Republic were followed by the emigration of some of the Jewish population. Immediately after the end of the Second World War, three million Germans were forcibly expelled from Czechoslovakia and the vacated border areas were subsequently resettled. The establishment of communism in Czechoslovakia in 1948 triggered another wave of emigration of those who did not agree with the new regime. The short period of political ease in the 1960s was forcefully broken by the occupation of Czechoslovakia by the Warsaw Pact armies in August 1968. In the following twenty-year period of the so-called normalisation, more than 200 thousand people left the country voluntarily or forcefully.
This section also concentrates on the main migration processes in Czechoslovakia and the Czech Republic, which reflect the main trends in the development of residential structures in the Czech Lands throughout the 20th century and the early 21st century – concentration of population in larger towns and industrial areas, depopulation of the rural areas and the ongoing process of suburbanisation. Resettlement of the Germans from Podbořany in June 1946. VÚA-VHA Praha.


Czech State and Europe in the 20th Century