The oldest reference to the Jewish population in the Czech milieu comes from the early 10th century, but reliable documents are available from the end of the 11th century. The position of the Jews in society was not easy because of the hostile attitudes of the Church and the Christian population. The general opposition to the Jews intensified in the post-Hussite period. Their divergence caused hatred and disdain although there were scholars in various disciplines and good financiers among them. They had always been regarded as a marginal group of the population concentrated in special communities (ghettos).

The Jewish cemetery in Rabí is situated in an unusual position at the foot of a castle hill in an immediate vicinity of the town. The Jewish community in Rabí was allegedly formed under Půta Švihovský of Rýzmberk in the late 15th century, but direct documents come from as late as the 17th century. The original synagogue next to the cemetery has survived. Photo Robert Šimůnek, 2009. 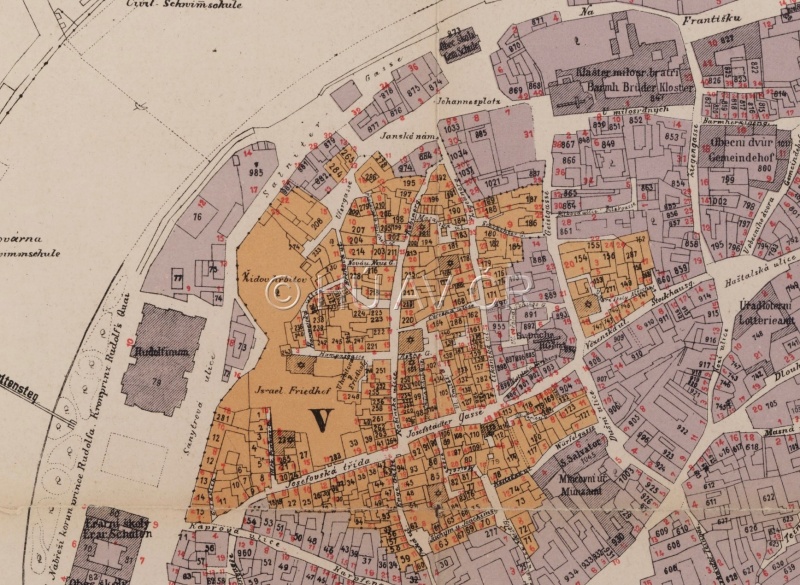 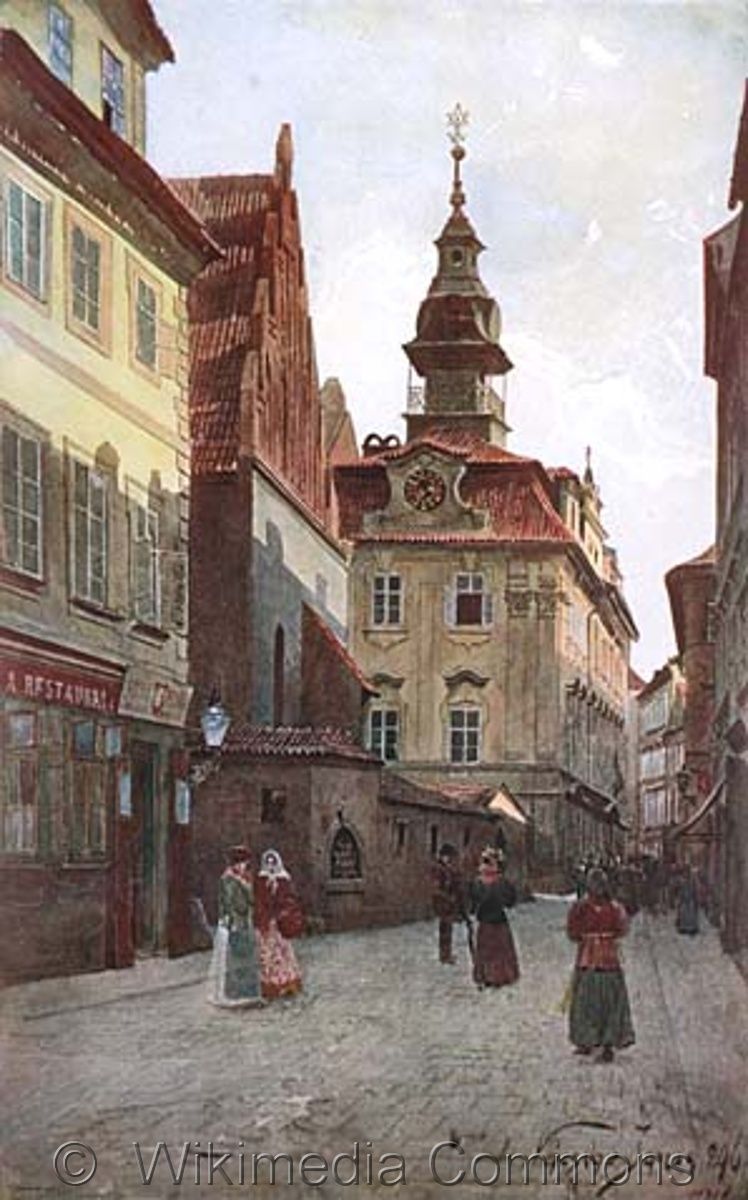 Basic demographic development by the year 1800

In the Middle Ages, the population development in the Czech Lands was characterised by high birth and death rates, the death rate being heavily affected by external factors (e.g. crop failures, epidemics, wars). Favourable climatic conditions lasting until the 13th century contributed to the population of the higher grounds. However, the rapid growth of population in the 13th-14th centuries gradually turned into regression due to the cooling, exhaustion of the feudal economy, plague pandemic, and wars (Hussite Wars). The population started to grow again at the end of the 15th century. Another drop arrived in the first half of the 17th century due to the Thirty Year War and large epidemics. The overall losses of the population estimated as 30 % were relatively quickly replenished because the marriage rate and birth rate increased and the death rate was relatively favourable despite certain greater fluctuations (two plague pandemics, wars in the mid-18th century, crop failure in 1771–1772).

Antonín Frozín, a Catholic priest and Baroque nationalist conceived the foreword to the book Obroviště mariánského Atlanta (1704, translation of part of the Atlas Marianus by W. Gumpenberg) as a defence of the Czech language and nationality. Based on his findings acquired during his travels around the Kingdom of Bohemia, he opposed the contemporary notion that the Czech language was a mere minority language in the land. Frozín’s opinions on the national situation in Bohemia probably roughly reflect the reality but above all, they serve as a valuable testimony of the personal experience of a Baroque scholar and his ideas. 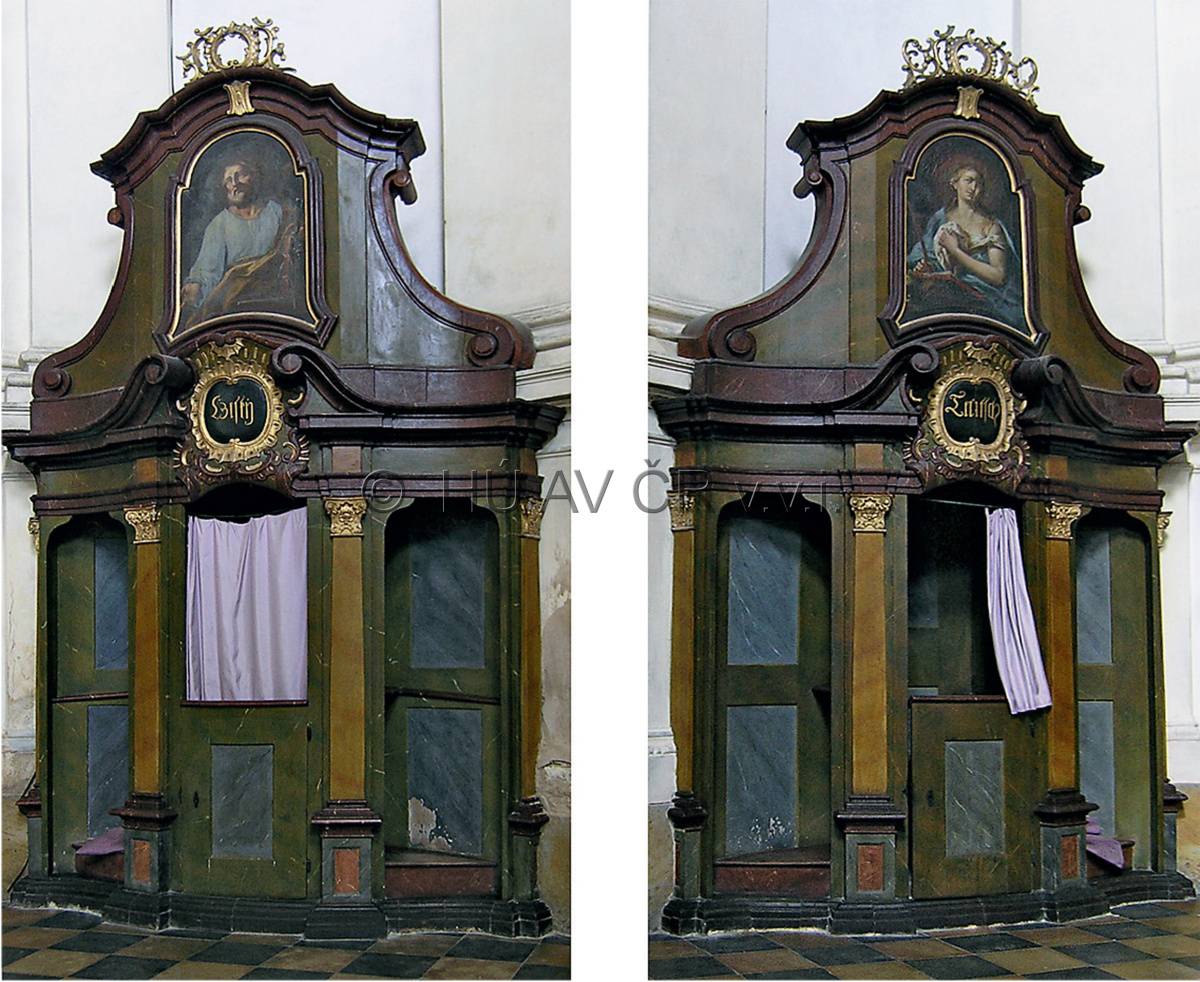 Czech' and 'German' confessional from the Church of the Assumption of Our Lady in the Augustinian Abbey of Dolní Ročov. Photo Jiří Mikulec, 2009, digital modification Kateřina Bobková-Valentová.

In the early modern times, Jews in the Czech Lands remained a closed group on the edge of the society existing in the urban milieu of closed ghettos. Thanks to the king’s goodwill, the Jewish communities flourished in the second half of the 16th and first half of the 17th century. Later, however, restrictions of the Jewish population again intensified (e.g. the Familianten law, 1726). Under the rule of Joseph II, the Jews acquired hitherto unprecedented opportunities (all forms of trade and production, access to the guilds, higher education, and university education), which opened the Jewish minority a path to emancipation. 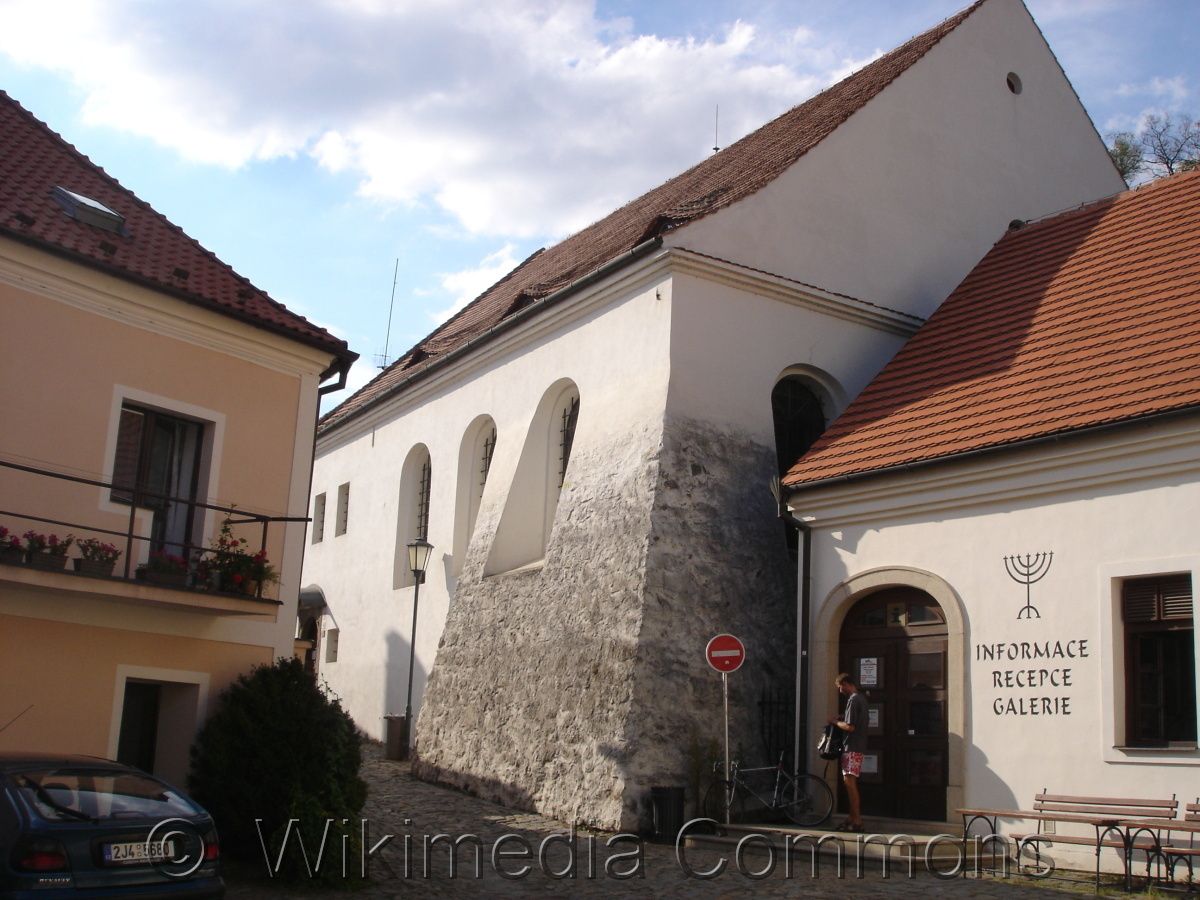 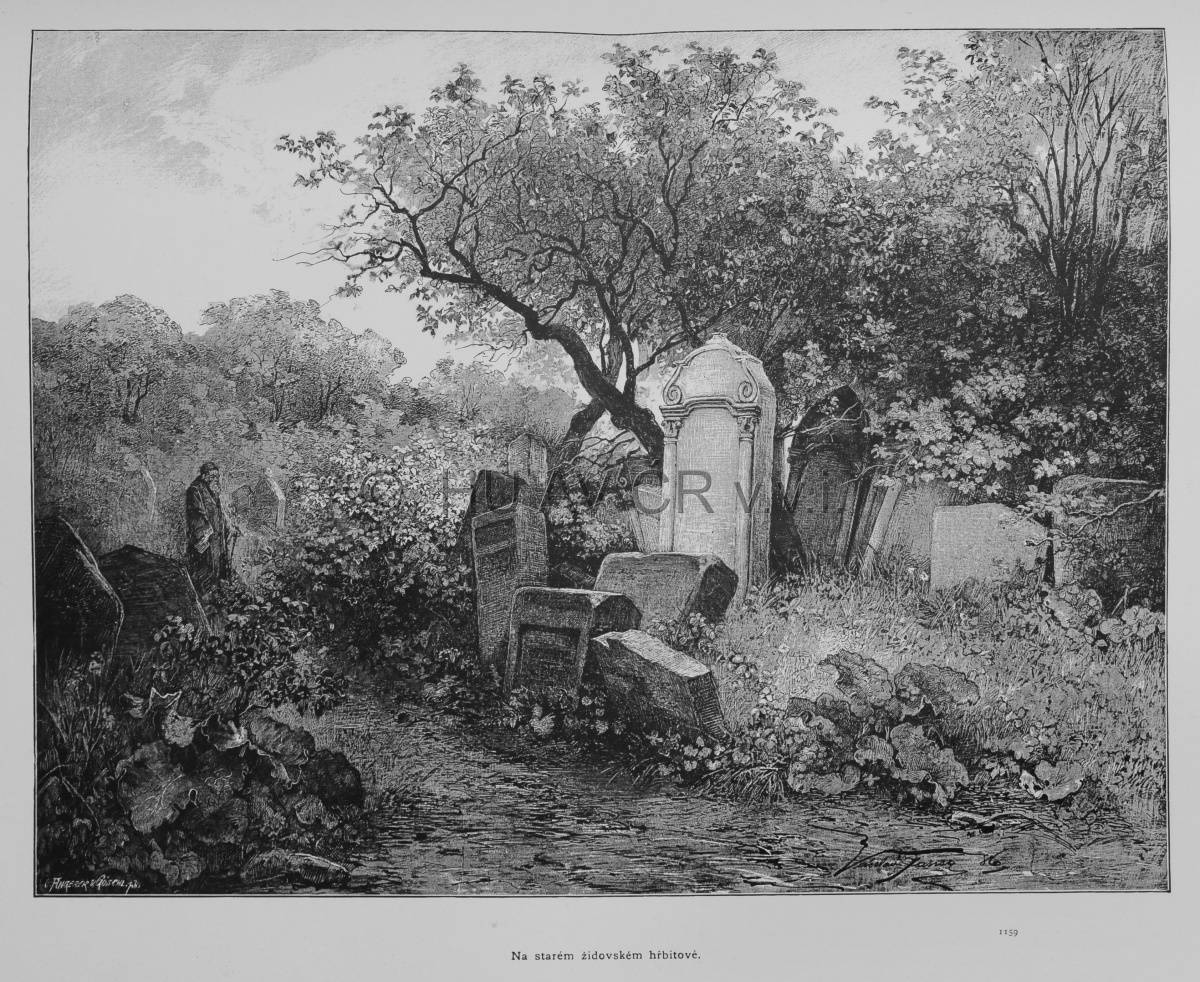 In an old Jewish cemetery (Prague), in: Ottovy Čechy III (Praha), 2nd part (1887). Library of the Institute of History, CAS. Jewish street in Nový Bydžov, in: Ottovy Čechy XIV (1908). Library of the Institute of History, CAS.

Ethnic composition of the Czech Lands in the mid-19th century

For long centuries, the Czech Lands were characterized by the coexistence of the majority Czechs and minority Germans. At the end of the 18th century, the German language gained significant ground, but the advance of the Czech national movement slowed down the ethnic consequences of this situation. In fact, in the early 1860s, with the growing industrialisation and urbanisation of the Czech Lands, also the Czech milieu started to offer sufficient potentialities for social advance. Bohemia was in principle divided into ethnically German border regions and Czech interior except for the Jihlava and Svitavy language islands and the newly established Czech enclave in the west part of the north-Bohemian coal district. In Prague and České Budějovice, the German minority gradually diminished. In Moravia, strong German minorities remained in larger towns. The Czech element intensified mainly in linguistically mixed areas while the German districts kept their ethnic character. In Silesia, the German population slightly dominated the Polish and Czech minorities. 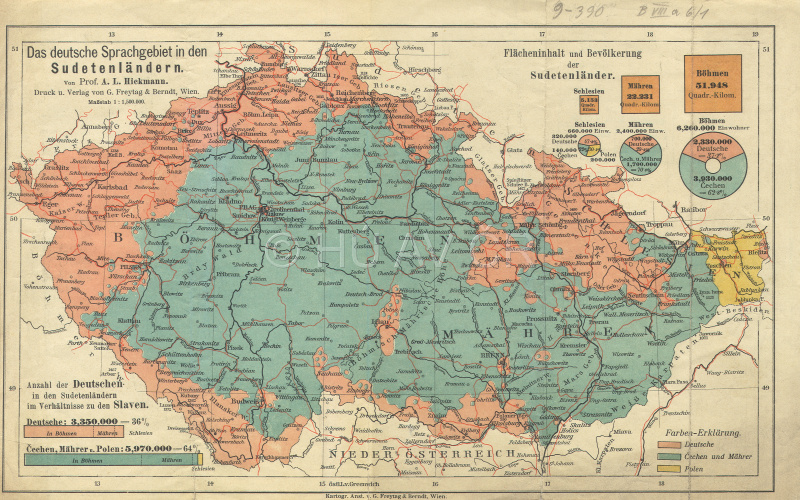 Example of an ethnic map from the German milieu – A. L. HICKMANN, Das deutsche Sprachgebiet in den Sudetenländern (1899). Map Collection of the Institute of History, CAS. Display map 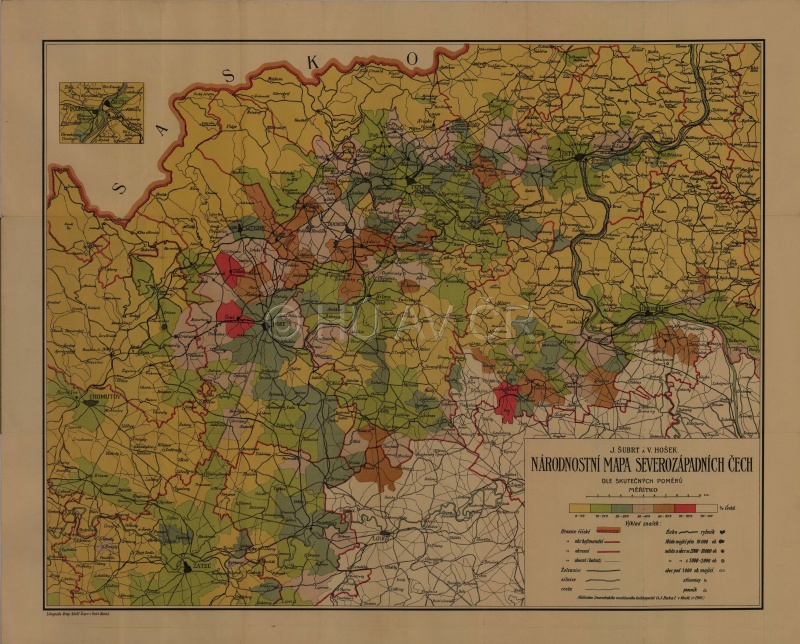 The first more accurate representation of the national structure of the population of Czech lands appears on Pavel Josef Šafařík's map, Slovanský zeměvid (1842). Map collection of the Institute of History, CAS. Display map 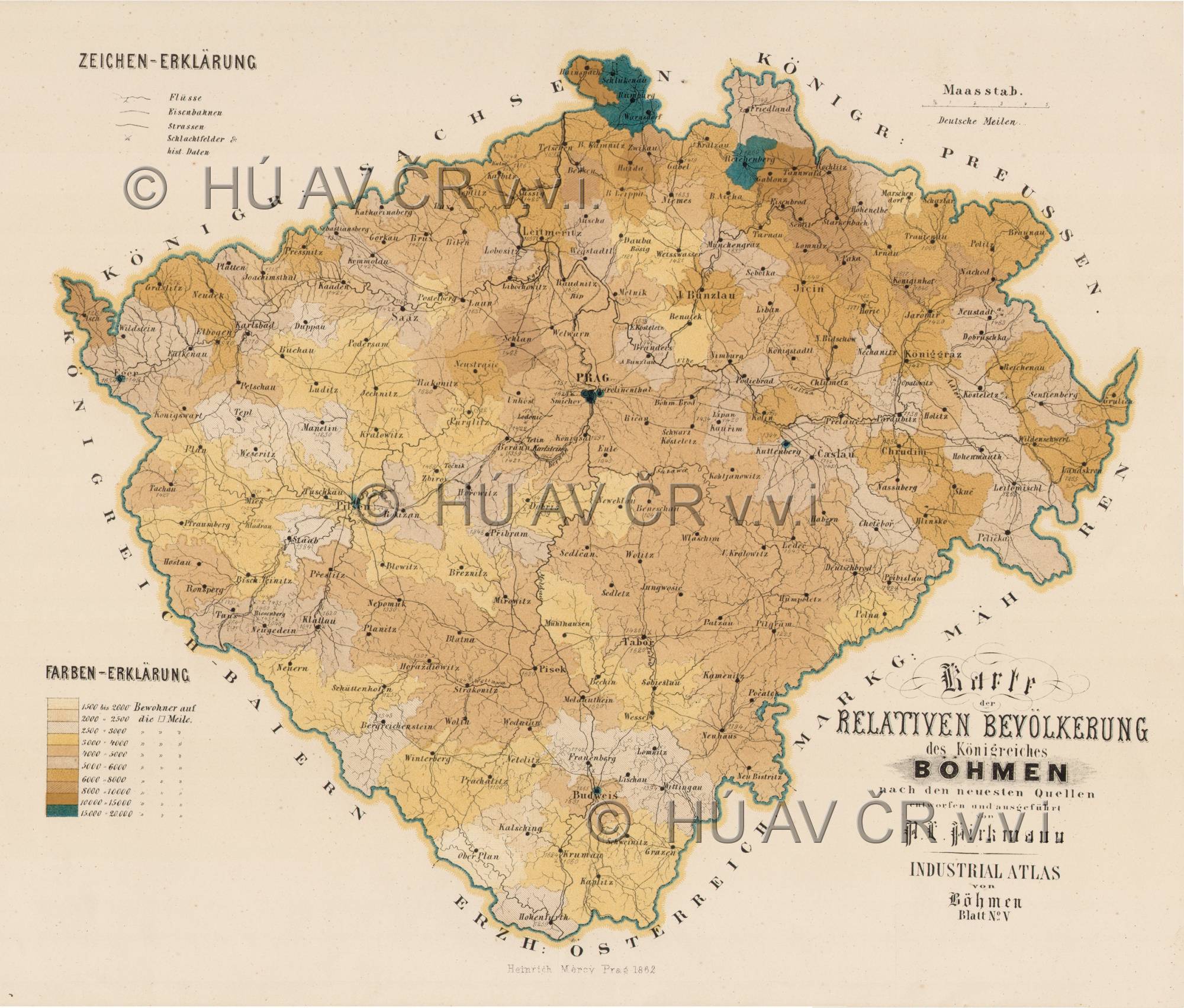 For long centuries, the Czech Lands were characterized by coexistence of the majority Czechs and minority Germans. The share of the Germans gradually grew since the colonising period in the 13th century. The German population concentrated in the border areas, but German language islands were also found in the interior (e.g. the Jihlava region). Jews who lived on the territory of the Czech Lands ever since the 11th century formed a specific group. Much like in many other European countries, the Jewish minority had to face many adverse events and social expulsion, which started to ease at the end of the 18th century.
In the 19th century, the Czech nation gradually became emancipated and the national movement expanded. The relations between the Czech and German populations were heavily affected by growing nationalism on both sides in the second half of the 19th century and the early 20th century. The defeat of the Central Powers in the First World War resulted in the collapse of the Austro-Hungarian Monarchy and creation of independent successor states. The newly established Czechoslovak Republic was a multiethnic state where other ethnic minorities lived besides the Czechs, Slovaks and Germans (the Jews, Poles, Hungarians, Ruthenians, Ukrainians, Russians and other).
The Czech-German relations started to escalate again in the 1930s due to the growing nationalist tendencies of the German population.
The World War II events and the traumas provoked strong anti-German sentiments among the Czechoslovak population and doubts about a future coexistence of the Czechs and Germans in a common state. The efforts to deal with the ethnic minorities in post-war Czechoslovakia resulted in forced mass resettlement of the German population. In 1945–1946, three million Germans left Czechoslovakia, thus fundamentally changing the ethnic structure.
The ethnically homogeneous composition of Czechoslovakia did not dramatically change until the fall of the communist regime in 1989 and opening the borders. At present, the most significant minorities in the Czech Republic include the Slovaks, Ukrainians and Vietnamese. This section also monitors demographic development of the population in the Czech Lands until the 18th century. If follows significant periods of the population growth and decline that were also strongly affected by external factors (e.g. changes in climatic conditions, war events, epidemics or crop failure). 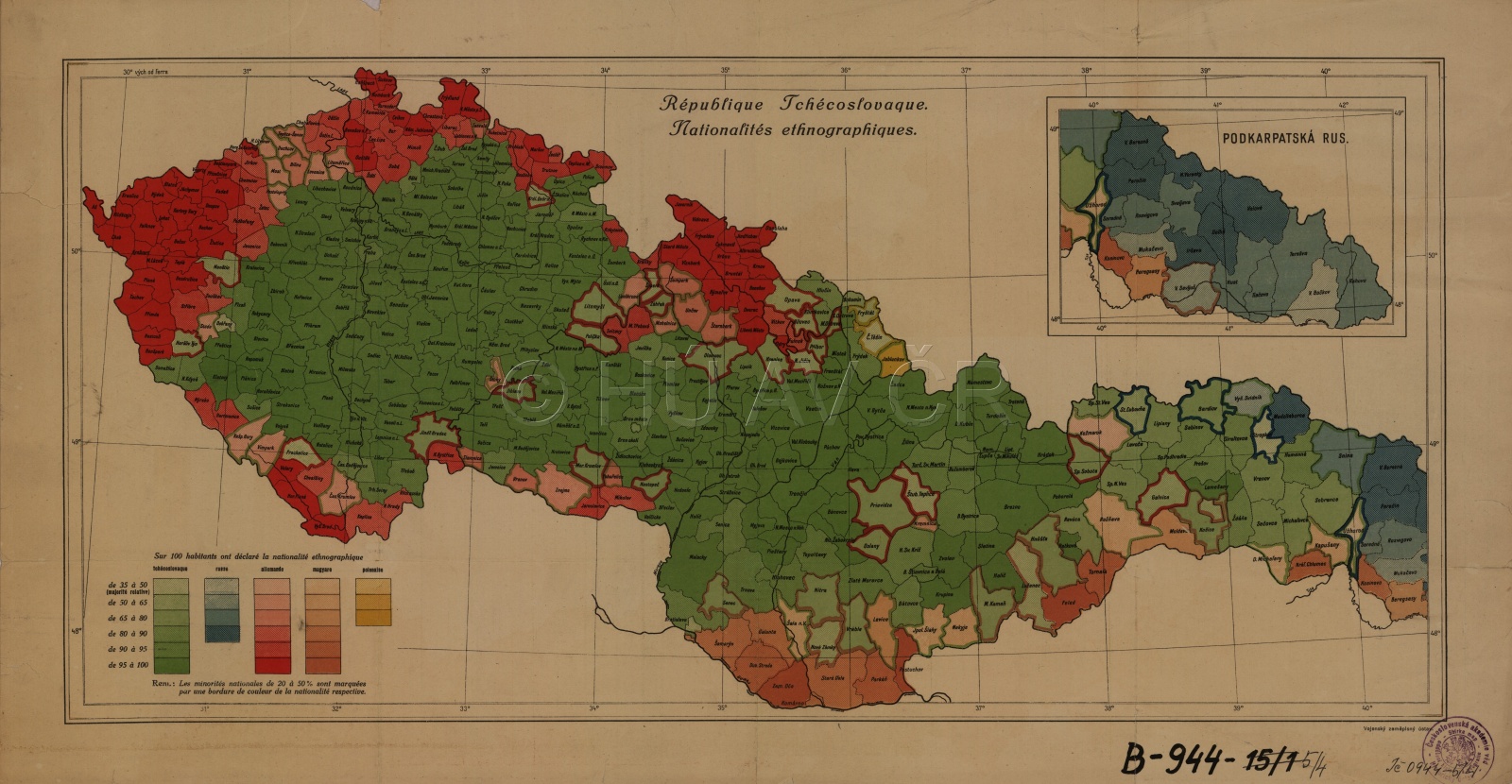 
Czech State and Europe in the 20th Century